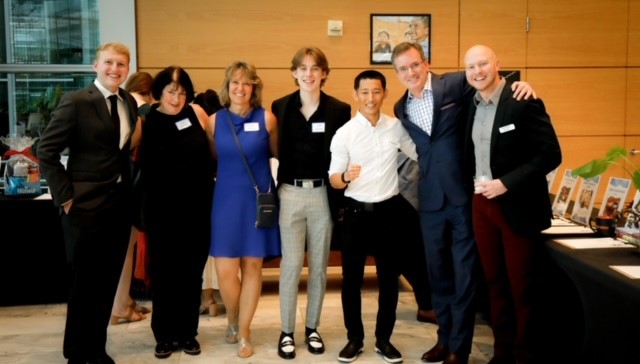 AMSG is proud to support military veterans, their family members, caregivers, and families of the fallen through organizations like Armed Services Arts Partnership (ASAP), the Navy SEAL Foundation, Travis Manion Foundation, the Headstrong Project, and other Veteran Service Organizations (VSOs).

AMSG also supports the literacy needs of children in underserved areas through a non-profit organization one of our team members, Brian Christmas, and his daughter who is a rising senior at Yale, formed called, “Every Page Counts”.  The organization provides books and runs a story time program for two subsidized housing areas in Fredericksburg, Virginia, with the intent of expanding to other neighborhoods. The mission of the organization is to facilitate a positive literacy environment for children to combat education inequity. More info on their website: https://everypagecounts.wixsite.com/everypage. More recently, AMSG has begun supporting the Makindu School in Kenya. This month we are shipping books to the school.

In keeping with our tradition of supporting children, AMSG has been a proud supporter of a non-profit organization called Students Helping Honduras. Check out the SHH story here to learn about how Shin Fujiyama, while a student at the University of Mary Washington, traveled to Honduras, in 2004, and it changed the direction of his life. In fact, in June of 2022, the first school that Shin and his team built in Honduras graduated its first-ever class of high school seniors. Keep in mind, this happened in an area of Honduras with a high school graduation rate of ZERO Percent. Over the years, Shin and his team have literally battled gangs and hurricanes. When the income stream for his non-profit basically disappeared due to the restrictions on foreign travel, Shin, who is a friend of AMSG’s CEO, Jim O’Farrell, started a YouTube channel, making videos about life in Honduras, and has become quite a celebrity, both in Honduras and here in the United States.

To support SHH, AMSG is sponsoring the 2nd Annual Brick by Brick Event to support Students Helping Honduras. The event is being held at Valo Park, located at 7950 Jones Branch Dr., McLean, VA on Saturday, September 10, 2022.

AMSG will be donating a silent auction package that includes two tickets to see Harry Potter on Broadway as well as train tickets, hotel room, dinner and a meet and greet with one of the actors.

Jim O’Farrell, AMSG’s President & CEO said the following, “Since AMSG’s founding we have supported organizations that promote the health and wellbeing of our Veterans and military families. Most recently, we expanded our support to include organizations AMSG employees care about the most, and as a result, I am constantly learning about new causes because of our amazing team. I am honored we’re in a position to support and provide resources to organizations, such as Students Helping Honduras, who are doing so much good in the world. I’ve said it before and I will say it again, AMSG is committed to our Nations Veterans; we are also committed to bettering our world by continuing to partner with and support organizations that uplift and change people’s lives for the better!”

About SHH: AMSG is a proud supporter of Students Helping Honduras. In 2004, Shin Fujiyama, a Northern Virginia resident, spent his winter break from the University of Mary Washington (located in Fredericksburg, VA) volunteering in Honduras. He was so moved by the experience that he returned to Honduras during his subsequent breaks to learn more about the country, its challenges, and its people. In 2006, he started Students Helping Honduras (SHH) with his sister, Cosmo, who was attending the College of William & Mary at the time. Shin established a makeshift office in his dorm room closet for the 501 (c) 3 nonprofit organization and began collecting coins inside a plastic penny jar. Many of the organization’s initial fundraising attempts failed miserably—including a penny drive that raised just over $23. Upon graduation in 2007, Shin and Cosmo moved to Honduras to build up the organization. Together with the people of Honduras, the organization built the village of Villa Soleada, the Villa Soleada Children’s Home, and the Villa Soleada Bilingual School. Concurrently, the team began building schools towards a goal of building 1,000 schools throughout Honduras. Nearly one hundred University campuses and schools throughout the world got behind the campaign. By 2019, more than 7,000 people had volunteered with the organization in Honduras from dozens of Universities and High School Chapters at schools including Clemson, Virginia Tech, U of Michigan, James Madison University, Towson University, and many others; 50 school projects had been completed, more than $5 million had been raised, and the organization had grown to employ more than 70 staff members—most of whom are Honduran national

AMSG in Conversation with Barbara Palmer